Tuesday, evening July 17, 2012, sometime around 10:45 PM, the granddaughter of a well-loved and active parishioner that had recently passed away decided to drive by grandma’s house on the way through town. While going by she saw smoke coming from the windows of the “Grandma’s” church building next door. It was her call at 10:57 p.m. that brought the Edgerton Fire Department to the Edgerton United Methodist Church.

The Edgerton department, along with six other fire departments (including fire departments across the state line of Butler & Angola, Indiana) would continue to work until 4:30 the next afternoon.  While they did manage to contain the fire to the bell tower and roof area of the sanctuary, and prevented it from spreading to the parsonage next door or damaging the education wing, the sanctuary and the main part of the building was damaged beyond repair.

The Edgerton United Methodist Church is a 152-year-old congregational body that has met on the corner of Hull and Michigan since 1860. The original structure has gone through four major renovations or additions to meet the needs of the congregation and the community over the years. The building was not just used on Sunday morning, but in fact was used seven days a week. On any given day of the week, some community group would be using the building to hold their meetings- the Cub Scouts, the Boy Scouts, the Girl Scouts, the Brownies, the Edgerton Food Bank, and the Edgerton Community Preschool all call the church ‘home’. In addition, the Edgerton Lions, Rotary, Pythian Sisters, Historical Society and the Williams County Senior Citizen Center   regularly use the facility. The fellowship hall was the site for many family functions for the citizens of the Edgerton community.

It has been said that the church is “what is left when the pastor is out of town and the building burns down.”  That was the case of the Edgerton United Methodist Church.  Pastor Rick Barnett (serving pastor at that time) was in Boston when the chair of the trustees, Ted Hill, called and said “The church is on fire. I am leaving now.” and then hung up.  It would be a day and a half of driving before Pastor Barnett would return to Edgerton; yet the congregation and the community did not wait around.

Although the education wing, which was built in 1968, only suffered smoke and some water damage, it was in danger while the fire department fought the fire.  Water had to be shot thru the roof line to prevent further spread of the fire. The fire department did manage to make entry into the church offices and covered what they could with tarps in an attempt to protect equipment and documents from water, in an effort to keep loss to a minimum.

The next morning, when the active fire was out but they were still fighting hot spots, those in charge of the fire scene allowed members of the congregation and later the community (including the Edgerton Football Team & Edgerton FFA) a short amount of time to enter the building to save what could be saved. Even with the limited amount of time, they worked together and removed many items from the offices, preschool, Edgerton Food Pantry, and the Donna Rowe Historical Room (named after the grandma of the girl that made the first call).

The education wing only suffered water and smoke damage in the end, but the main building with the sanctuary and bell tower (which had been thru a major restoration for the 150th anniversary of the congregation) was destroyed or damaged beyond repair.

The congregation is presently worshiping a few miles outside of town with its sister congregation, the Emanuel United Methodist church.(See Note Below) Many members, while still in a state of shock, are already talking about how to return to or restore many of the ministries that went on in the Edgerton United Methodist Church building. The working plan is to have the education wing up and running in time for the start of school for the preschool and some of the scout programs.  The offices and fellowship hall should be available a week or two later. At that point there will be a United Methodist worship service again in the town of Edgerton.

Many of the ministries of the congregation (Pre-school, Scouts and others) were up and running by September of that year.

On October 7th 2012 the Edgerton congregation returned to the downtown building for worship. They are using the old fellowship hall as a worship center until the new building is finished.

On Palm Sunday ( March 24th 2013) we had a joint worship at 10:00 a.m. in the fellowship hall of the Edgerton building. Bishop Gregory V. Palmer brought the message. At 11:15 a.m. we had a ground breaking ceremony for the new church building.

On April 6, 2014, the Edgerton UMC held their first official service in the new church building. 190 people joined the congregation in dedicating the new building. 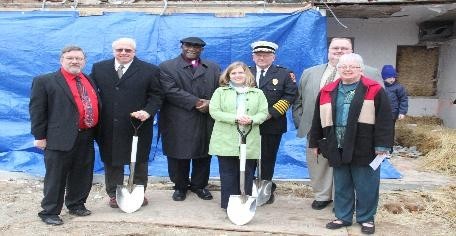 Where to Find Us:

OFFICE IS CLOSED DURING BAD WEATHER WHEN EDGERTON SCHOOLS ARE CLOSED

Edgerton Community Food Pantry- located in the Edgerton UMC. Open Thursdays (see Calendar of Events for holiday closures) from 1-3 PM.  Enter the Hull Street entrance, go up the stairs and through the double doors at the top of the stairs.

If you have a concern that you wish to pray over, or if you wish for someone to pray with you (or for your concern), stop in or call the church to leave your prayer request on the answering machine or with the secretary.